With most of us living our lives in limbo, disconnected and isolated from our usual social circles and support since the pandemic hit in early 2020, the arrival of vaccines signalled hope. In fact up until earlier this year, I was a firm believer that my state government — aware of its semi-autonomous position in the federation of Malaysia, a leftover privilege from its unique history as an autonomous region under the British Protectorate for a century — was acting with its residents’ best interest in their hearts and minds. But perhaps I had let idealism get the better of me. And while I don’t pretend that I’m an expert (nor do I want to be) in running a national or regional task force to handle vaccination roll-outs, I have also come to balk at the anti-intellectualism which appears to fester at the very centre of the regional/state government, and the way they communicate — or not communicate in this case — information.

We are not just numbers on a page.

No matter how much governments and civil servants wish us to be.

In the last year and a half, many have lived through fear, anger, grief, despair. I have chosen to focus on anger. Because in my core, I’m a media and cultural theorist: I see how politicians, civil servants, governments choose to present information, to communicate, to represent themselves, to represent the voice and interests of the voting public. And because it is Malaysia, they have chosen to represent, and prioritise the elite few — those with the all-important connections, or as the Asians (business people) like to call it: guangxi. Yes, the pandemic has definitely laid bare class systems in countries which were previously very uncomfortable with talking about class. And again, because it’s Malaysia, there is an added layer to the class systems, as it has been drilled into us through national policies and education systems: that of race, and that of connections.

We can choose to focus on how those in the Global North are hoarding vaccines, and in refusing to provide aid, poorer (and developing countries) are suffering from vaccine shortages. But focusing just on that, and frankly, pointing fingers at others for our problems, is just avoiding the problems and the rot at the core altogether. For isn’t it much easier to blame Malaysia’s national racist policies and politics on others? Hell, it’s been done since 1953.

In the 6 years I’ve been back, I can’t recall the number of times I’ve been told that things are done the (Sarawakian) way because it is the way it is; and it is impolite to demand better because god forbid, I question the hospitality and spirit of Sarawakian ‘can-do-ness’ with my “Western attitude”. Slinging matches where politicians hurl verbal insults at each other, speculate on rumours and advocating for voodooism are totally acceptable in this provincial approach to politics though. However, it is also this spirit of ‘can-do-ness’ that breeds this deep-seated anti-intellectualism. I wished it only bred a paternalistic approach to governance, but that’ll be paying them too much of a compliment.

Instead, on top of being treated like numbers on a page, people’s expertise and common sense are treated with contempt. Dare to question the logics of any decision-making process (including the straight out rejection of the AstraZeneca vaccine offered to Sarawak as an opt in voluntary option), and you’d be accused of witchery, or for being a cyber-bully, or worse (for any Asian government): a social activist. Case in point:

But is is sustainable?

For while the ruling classes are happily getting vaccinated, rest assured in the availability of vaccines for them and their special kin, the mere mortals have to wait. And live in constant fear as numbers of infections in the city continue to rise on a daily basis. My parents (in their 60s and 70s) have to not only wait to be vaccinated, but at one point, couldn’t find any information at all about what was happening to their turn; when phone calls to supposed helplines were either hung up on or frostily told “not [the state’s] problem”. Meanwhile, we constantly hear of families and special friends of those in the civil service being offered vaccination slots even as the media (and politicians) tell us there’s not enough vaccines. Until one day, rumours become an act caught red-handed. The power (and beauty) of social media.

It is why I’ve chosen to focus on anger. While those comfortably connected to the civil service (and their extended families) can feel safer now that they’re vaccinated, at any given time my university’s management can demand I go back to face to face teaching. And since I live with my family, I will be forced to put everyone I encounter at risk. But this is about more than me. What of the food and market vendors, those in the delivery service, those in front facing service industries? Are their lives worth less because they don’t pander to the chosen few?

This is why I’ve chosen to focus on anger, when the procurement of vaccines is politicised, to the point where the state can — even with claims that there is a shortage of vaccines — reject the offer of the AstraZeneca (AZ) in April. Clearly political clout and pride are more important than saving lives (or at the very least, bringing down the risk of infections), despite dozens of medical expert opinions saying there is a 0.0004% chance of a blood clot (and about 38 million vaccinated in the UK, probably about 2/3 of that number with the AZ vaccine). Instead, we watch while the vaccine is made available to those who volunteer, and if that already didn’t drive a wedge of fear in, we get an elected official smugly telling us we’ll have to “walk into any of the vaccination centres in Selangor and KL” if we wanted to be vaccinated with a vaccine that the state doesn’t want. None of which allay fears that vaccinations are running behind, crippled by not only lack of them, but by verified stories of those with special privilege being vaccinated first. I wish these stories were only rumours. If my parents, who are in their 60s and 70s aren’t even vaccinated in May, what of the rest of us, with no underlying health conditions, who’d — sooner or later — be forced back to work.

So even when the politicians caved and made the AZ vaccine available, the damage is done. The voting public is fickle after all. That’s the nature of democracy. But the message, whether the ruling class would like to admit it or not, is loud and clear: it’s not just about the contempt with which the ruling class hold the public, it’s a message that says they no longer care because they’ve been safely vaccinated, and if the number of infections are high, it’s because people are taking risks and not being sympathetic towards the government. Shouldn’t we all be sympathising with the frontliners: the medical workers, the police, the delivery people? Shouldn’t we stop with the victim blaming, that it’s those who violate circuit breakers put in place, that are getting people infected? Shouldn’t we be educating people more, that vaccines does not mean immunity? Shouldn’t elected officials be doing their jobs, working for the people? 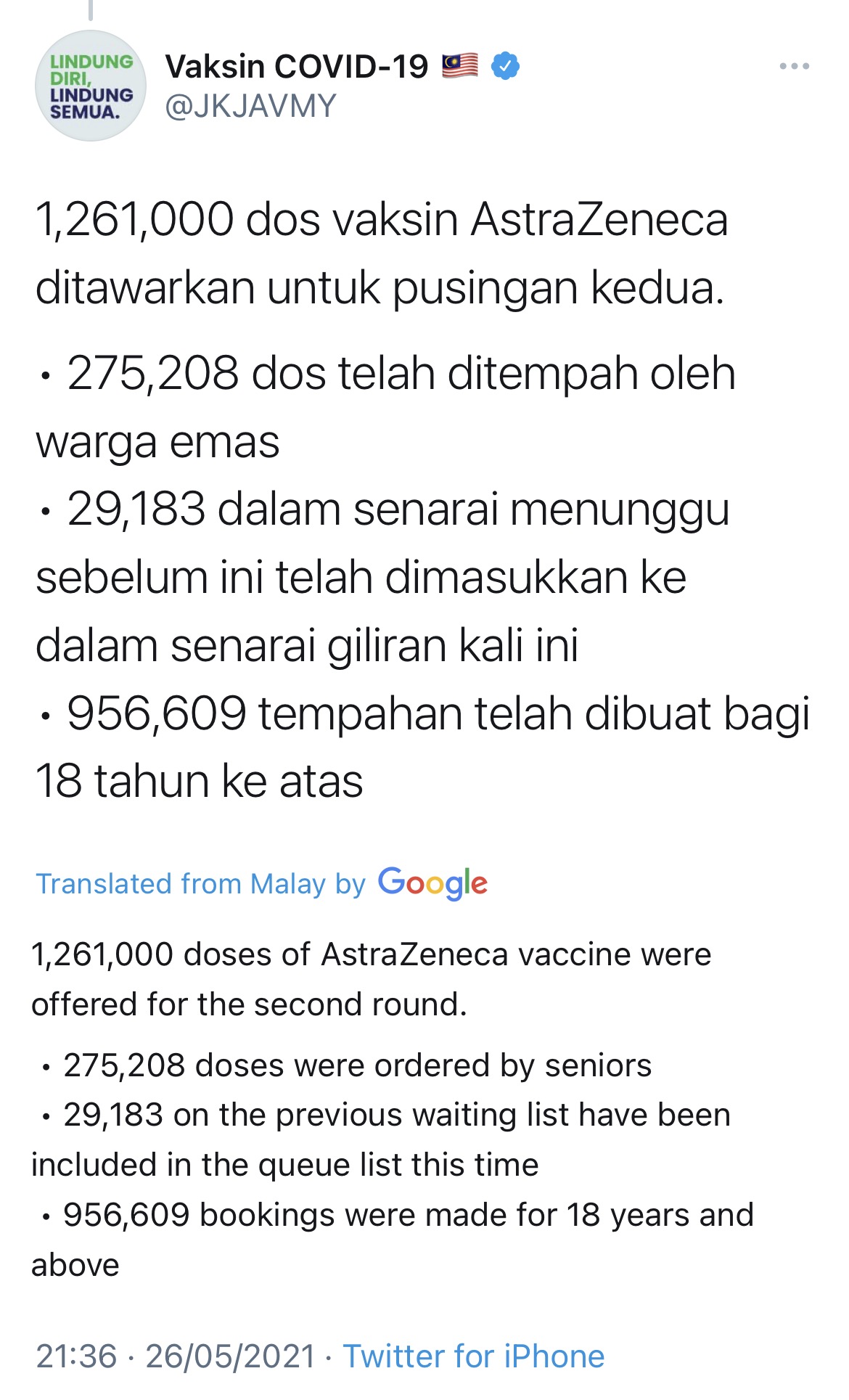 This is what a culture of complacency breeds. That the normal people would have to continue taking risks in their everyday lives while they fight for vaccines Battle Royale-style in the hopes that volunteering for a vaccine that is politically fraught may at least provide them some semblance of security. So what does it say, when 1.2 million doses of the AZ vaccine, made available on a voluntary basis to 5 states in the country, is snapped up in 50 minutes? The supposed vaccine that no one in the state wanted. Because elected officials think their own people are too stupid to make an informed decision.

After all, we are only numbers on a page for them. What function do we serve for them outside of an election when they and their kin have already been vaccinated. Don’t we deserve better at a time of a global pandemic? Isn’t public health a basic right?

This site uses Akismet to reduce spam. Learn how your comment data is processed.